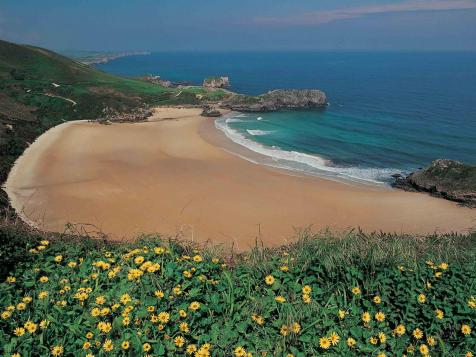 The beach at Torimbia

This is one of the most beautiful beaches along the Llaniscan coast. It has been popular since the 1960s because it is also a nudist beach. Access to the beach is via the village of Niembro, along the asphalted path towards the hill at the top of the Cape of Prieto. This area is used as a car park. From here a pedestrian walkway goes down to the beach.

Torimbia is classified as a natural beach since it is surrounded by spectacular countryside and has cliffs of more than 50 metres in height, which form part of the north face of the flat sierra called Los Llanos. The beach has life guards, danger signs a Red Cross post and beach cleaning services as well as a refreshments stall in the high season.

Here the film has been shot: REMANDO AL VIENTO 1987

At 19 years of age Mary Shelly “gave birth” to the monster, Frankenstein. Here we see the vertiginous process of creation in romantic solitude amongst the major characters, Lord Byron, Percy Bisshe Shelley, Mary herself, her sister, Clara and the disturbing Doctor Polidori.