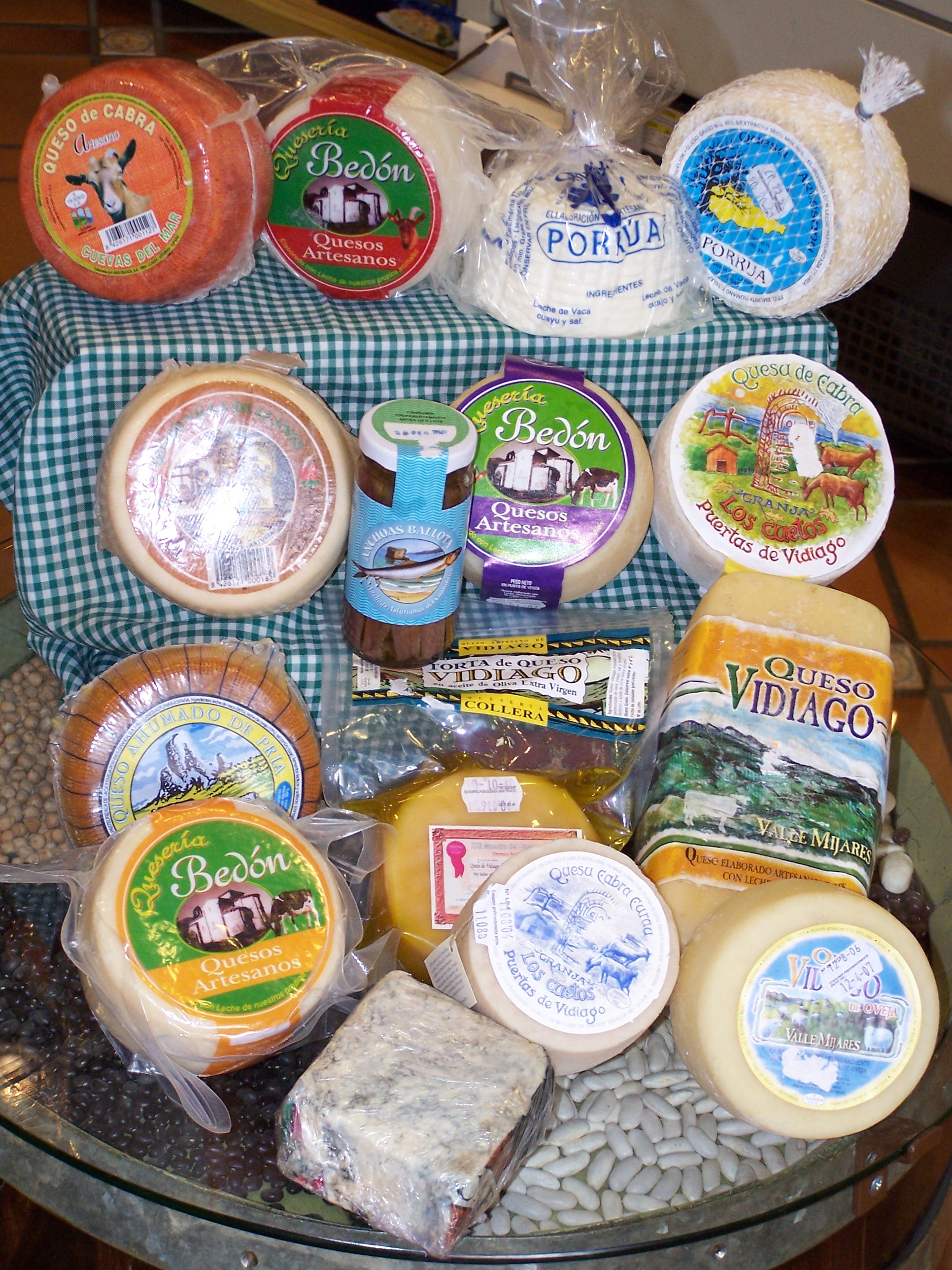 The Sierra del Cuera, the valleys, the greenery and the misty rain are together the “mother” of the cheeses produced here. Thus the “father” of the cheese is represented by the people of the area, who, with the passage of time have almost consecrated the traditions of cheese making. This in itself is as varied as the regions and the customs which form part of the Llaniscan life.

This rich variety of cheese can be enjoyed both at the sidrerias and restaurants as well as in the local market. It can be bought by weight and taken home to enjoy! The local weekly market is still very much alive and can be found in various villages in the borough, each according to its day. Other major events in the calendar also celebrate this local delicacy: The trade fair, organised in the town of Llanes at Easter the Eastern Asturias Cheese Competition (First Sunday in August in Llanes) of the Countryside Fair (third Sunday in August in Posada.) On the other hand there are specialist cheese shops which make your purchase very easy a delicious gift to savour when once again at home

In the borough of Llanes you can find cheeses whose manufacture has been handed down through the generations: the queso fresco de Porrúa (the fresh cheese from Porrúa (which also comes cured), the soft and creamy queso de Vidiago (Vidiago cheese) or the famous Ahumado de Pría (smoked cheese of Pría) These villages which give their name to these cheese also make other varieties for the more curious among us. Cheeses like l Three Leches, (Three milks) or the Flor de Texu (flower of Texu) (a cheese with a shape similar to that of the tetilla), goat´s cheese from "Cuevas del Mar" and the soft goat´s cheese from "La Cuevona". All of these are made in the cheese making factory of Inés Granda de Pría.  A newer cheese is that of San Roque del Acebal, made with cow’s milk and the blue Pie de la Sierra, (made of goat’s milk) made by Granja Los Cuetos in Puertas de Vidiago. Also famous are the cheeses made in the cheese factory at Bedón which produces cheese of cow’s milk, cow’s and goat’s milk, goat’s milk cheese and cottage cheese.

This culture of cheese, “quesu" (Asturian language version of the Castellano word, queso, cheese) and the processes of creating it are really very well explained together with other topics of interest in The Ethnographic Museum of Asturias in Porrúa. This has to be more or less an obligatory visit for the tourist in the borough of Llanes since it will help the visitor understand much better all that he or she is seeing, feeling and eating!

As a fishing village, Llanes stands out because of its seafood dishes from the Cantabric Sea. Here are a few examples: - andaricas (crabs), centollos, (spider crabs) bugres o lubricantes (lobsters) – and rock fish, both baked and grilled – There is also the popular xáragu fish(jargo), mullet, cabracho or scorpion fish, pixin (monk fish), besugo (sea bream) lubina (bass), either soup or stew, -and all the varieties of tuna, the star of summer together with anchovies and squid, not to mention those beautiful semi-preserved anchovies from Llanes. The quality of the food is available all year round but especially during the Celebratory Days of Seafood in springtime. 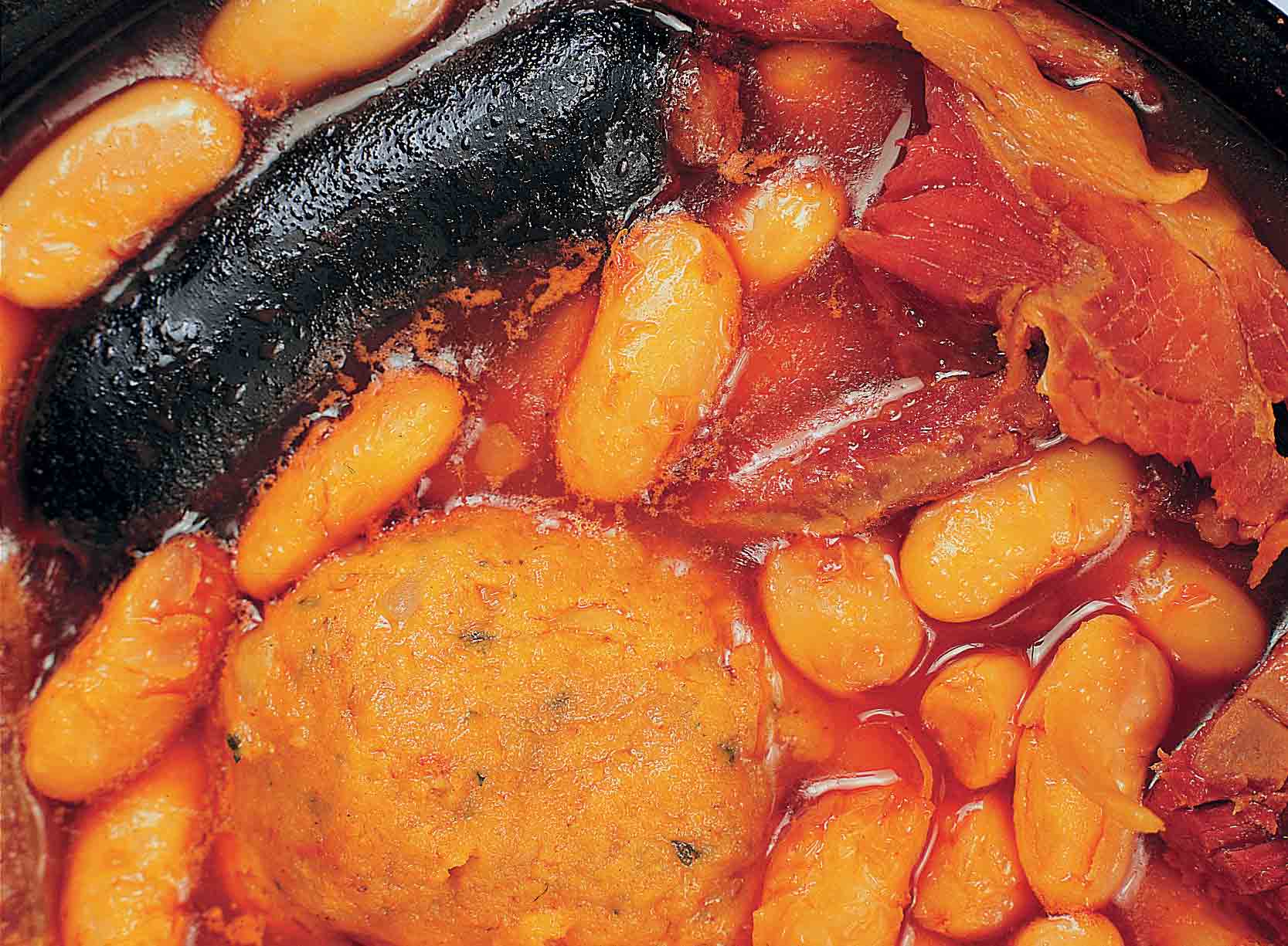 The local landscape produces such delicacies as the little green beans, Verdinas, prepared like the rich bean stew, Fabada or stewed with game or sea food.

Another Group of local delicacies come from maize and originates from South America. There are tortos (mini thick pancakes) which you can eat with Cabrales cheese, spicy minced meat or fried eggs. Again, there is the borona preñada (similar to a rich, heavy Toad in the Hole with spicy sausages.) This needs long, slow cooking. It is made with maize flour dough with chorizo sausages inside together with ribs, bacon and whatever else comes to hand. On top of all that there is, of course, the traditional Fabada. In Llanes we add an extra touch; pantruque (a sort of dumpling) made out of maize flour. Fabada, Beans and Green Beans each have their Celebratory Day in autumn.

The woods and the pasturelands of the sierra del Cuera, which is a protected area, produce game. There is wild boar, Roe Deer as well as excellent cuts of beef, lamb and goat.

The sweet toothed among us are called llambiones in this area and Llanes is a great place for those of us who are sweet addicts!

The typical sweetmeats of the area are frixuelos, casadielles and rice pudding or arroz con leche. Other delights are helado Peñasanta (mini soufflé), tartas de milhojas, (mille feuille) and walnuts or hazelnuts. These are real Works of art from the master confectioners of Llanes.

Finally, in keeping up with the times, Llanes has discovered new creative ideas in confectionary. These are the Cubes of Memory and the Chocolate Cubes, reproductions of the Masterpiece created in the port area by the sculptor and painter Ibarrola. 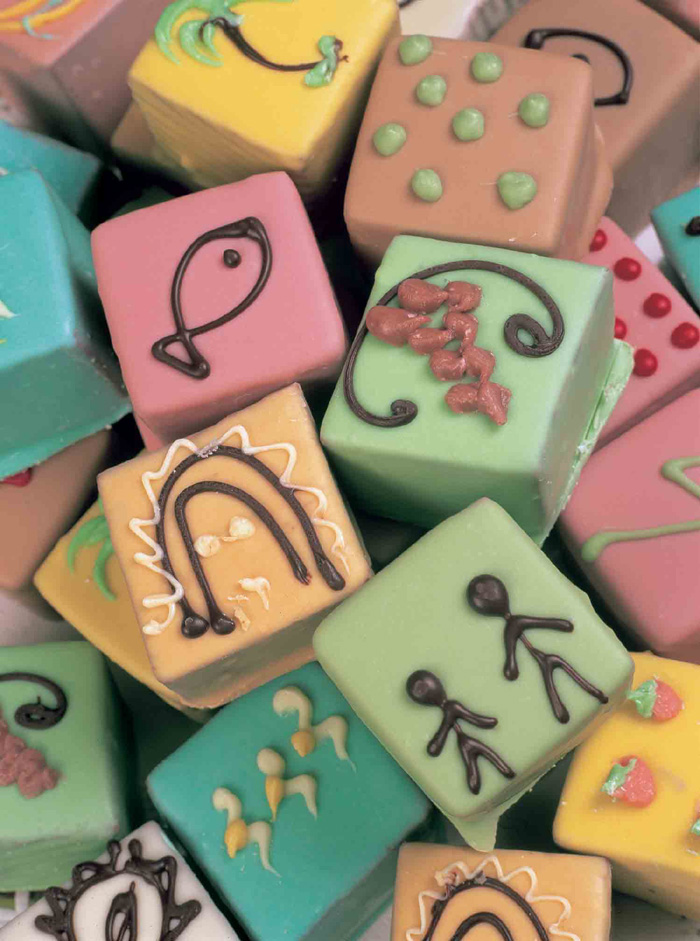 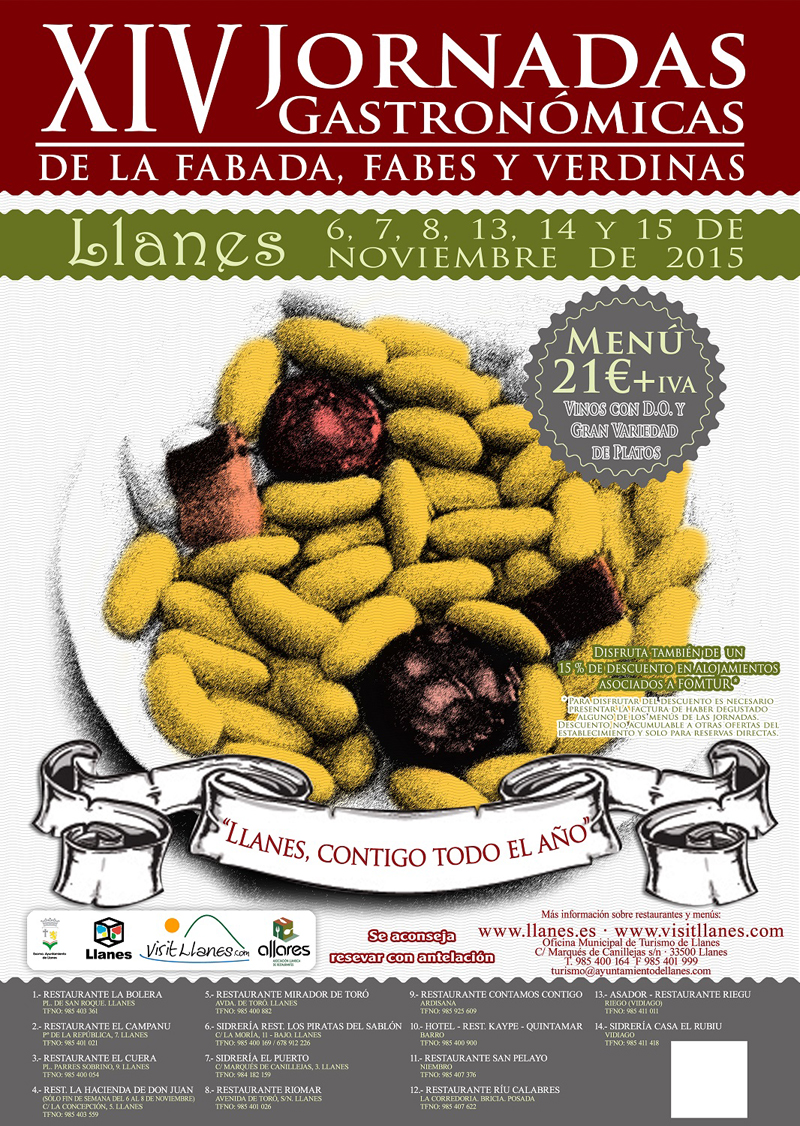 A Celebration of Fabada, Beans and Bean Stew

Beans (Fabes) These form an important part of Llaniscan cusine, just as in Asturias as a whole. Llanes has its own specialities though, for example, to go with fabada, (as if it weren´t enough all by itself!) we have “pantruque" a type of dumpling made from maize flour. Also, in the Valley of Ardisana, in the inland region of the borough, a small bean is grown, similar in size to the baked bean so beloved by the English and green in colour. It has a beautiful taste and is known as a Verdina

If you really want to experience the richness and quality of our cuisine, there is nothing better than to come along to our Celebratory Days of Bean stew, Beans and Green Beans organized by the town council. 2015 Celebratory Days will take place on 6th to 8th and 13th to 15th of November

As a fishing town, Llanes is well known for its dishes of seafood from the Cantabrican sea, such as andaricas (small crabs), centollos (spider crabs) and bugres or lubricantes (lobsters). There is just nothing better to really get a taste for this wonderful cuisine than to come along to the Celebratory Days of Seafood which the borough organises in spring.

The Celebratory Days of Seafood in 2015 will be for two weekend on May. 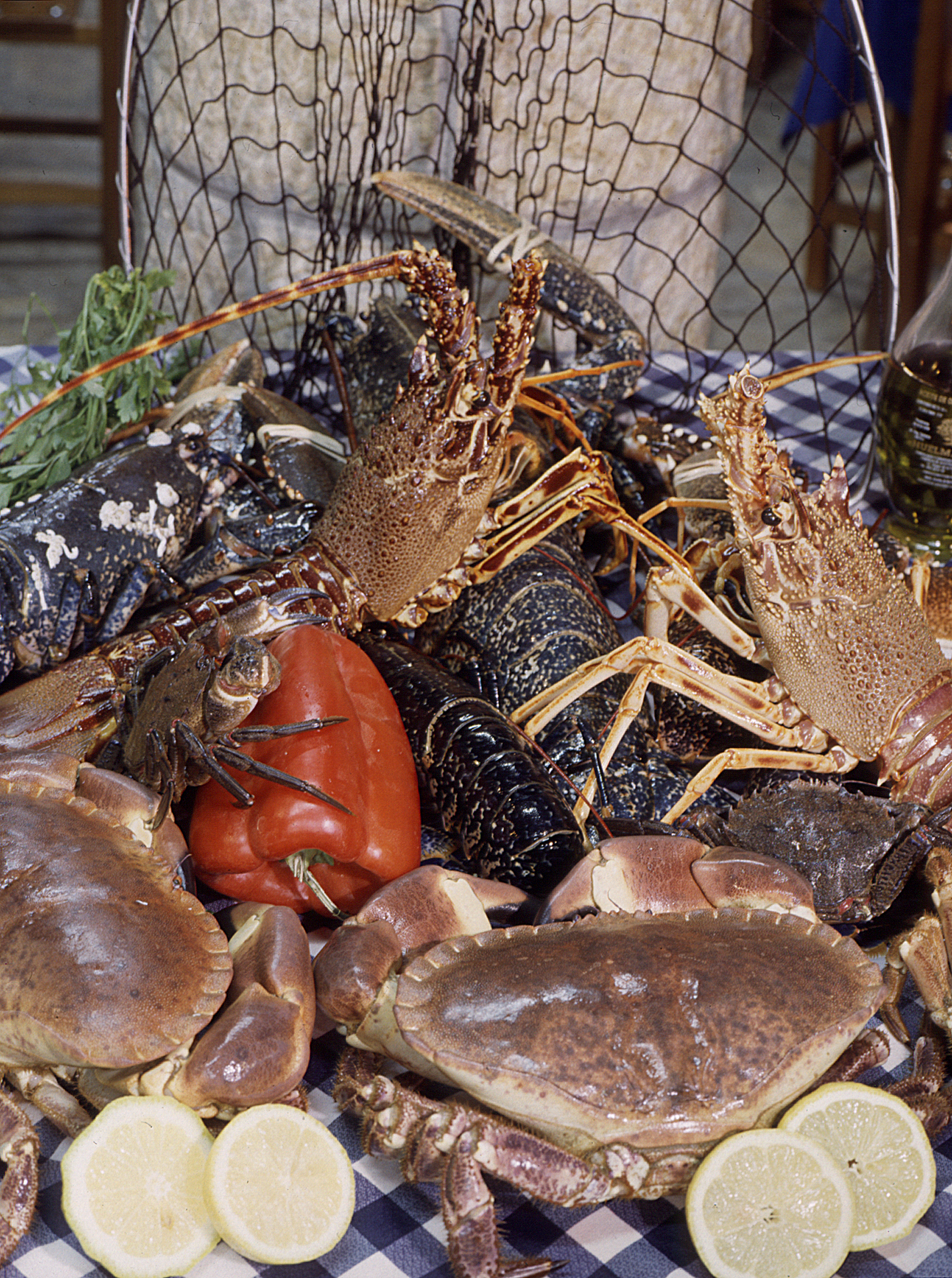 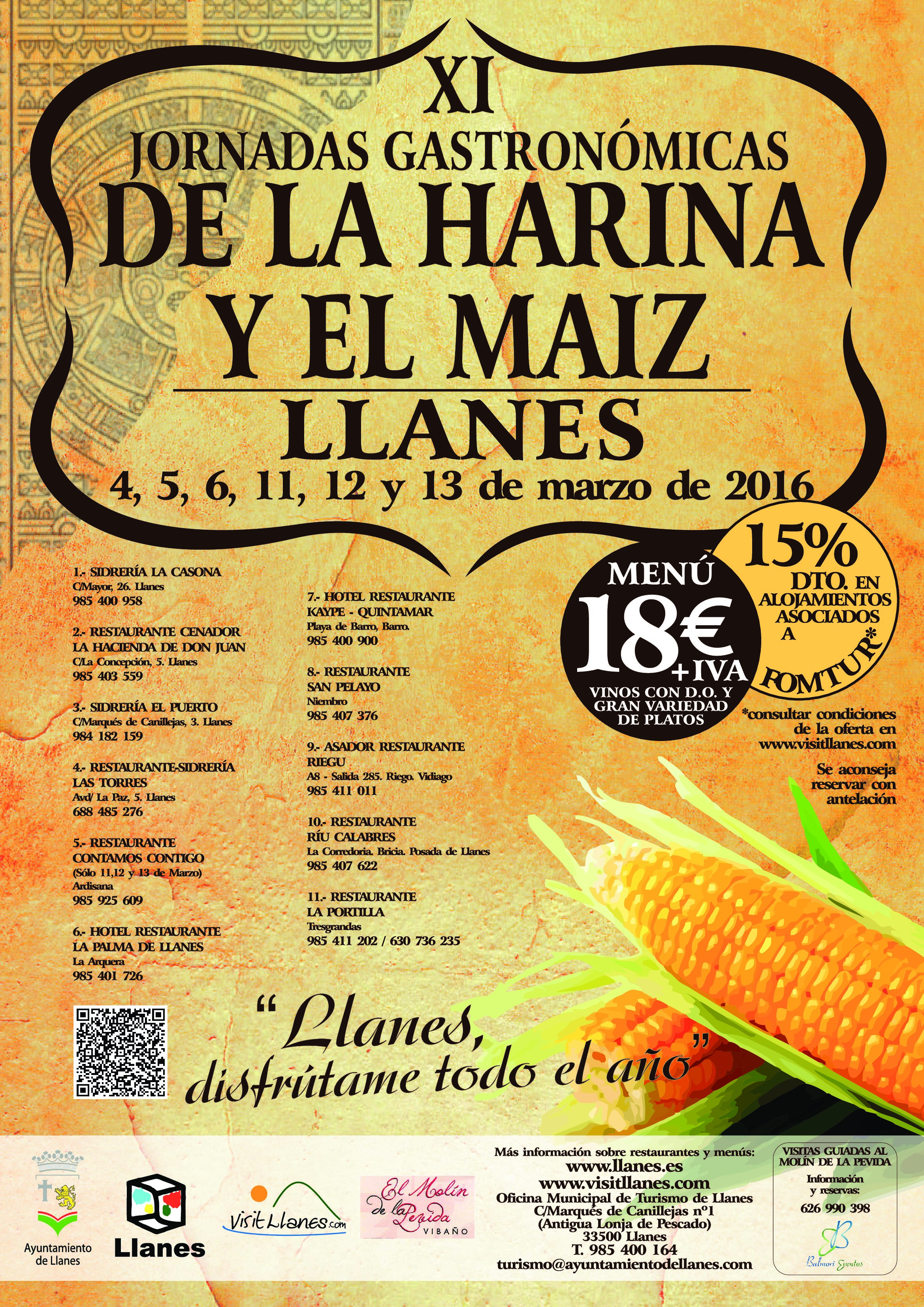 A Celebration of Flour and Maize

Flour and maize are important part of gastronomic tradition and culture in Llanes. "los tortos", "la borona" o "el pantruque" are the most known dishes. A celebration of flour and maize occurs every year on march, in 2015 from 13th to 15th and 20th to 22th. Price: 18 € + Iva , including D.O. wine.