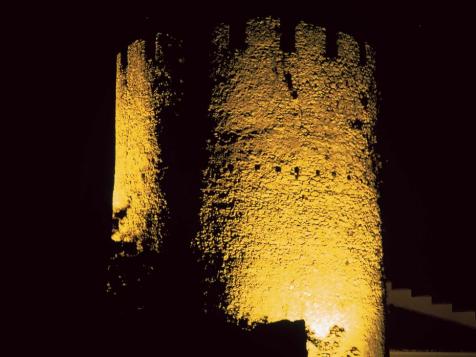 The town of Llanes, both historic centre and fishing port, has a large number of places of interest. Among these are such outstanding features as; The Old Quarter, declared an artistic and historic complex; the Port, where the artwork The Cubes of Memory, by the Basque artist, Augustín Ibarrola can be found; the beautiful Houses of the Indianos; walkways, such as the Paseo de San Pedro (St. Peter’s Walk) along the cliff tops or the riverside pathway, such as the one alongside the river Carroceu as well as such beautiful beaches as Toró, Puertu Chicu and El Sablón (The beach at El Sablón).
The official history of the town of Llanes goes back to the thirteenth century when Llanes, town of Aguilar, obtained its rights to independence in the first half of the thirteenth century in the reign of Alfonso IX. Its major constructions date from this era: the defensive walls, the great defensive Tower and the Basilica of Santa Maria.
It was an important port in terms of fishing activity, for both deep sea and inshore fishing, between the fifteenth and eighteenth centuries due to the salt trade and its shoals of fish, such as whale, sardines, conger eel, mackerel and red bream, amongst other species.
The  Municipal Golf Course
This is situated between the villages of Cué and Andrín, about 4Km from Llanes. This is a typical 18 hole Scottish style golf course. It has a par of  72, with white poles for  6,328 metres, Vc 74,8 and Slope 139. Yelow poles for 5,936 metres, Vc 72,6 and Slope 132. Blue poles for 5,419 metres, Vc 76,0 and Slope 134. Red poles for 4,909, Vc 72,3 and Slope 130. Its location allows you to enjoy some of the most beautiful panoramic views in the area.
Walks
Llanes has some superb walks which combine its beautiful scenery and historic interest. The Paseo de San Pedro, which dates from 1847, is a stunning cliff top  walk from which the whole town, the mountains and the entire costal area can be seen together, offering a breathtaking panorama. The Paseo de San Antón starts near the inner port, leads to the beach at Puerto Chico and continues on towards the beach at Toró and its coastal path. Similary, the walk along the Carrocedo River begins in the part of the town known as El Cuetu and terminates in the idylic little village of Pancar.
Enjoy
Where to eat
Have a rest
What to do
Plan your trip
Enjoy
Where to eat
Have a rest
What to do
Plan your trip
en