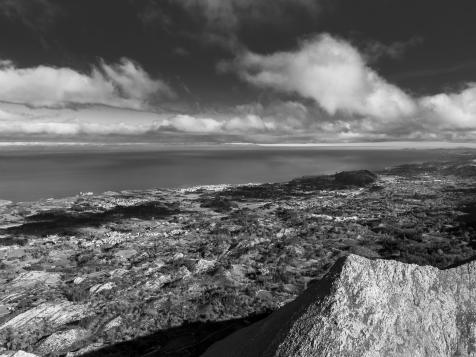 Access from Llanes by car: Take the road to Pancar and go through the village to Parres. Go straight on through Parres, Passing the church of Santa Marina on the right. Keep on going in the direction of El Mazucu and you will see eucalyptus plantations on either side of the road (LL-7.) There are also native trees such as chestnut, oak, hazel and birch which line the sides of the road almost up to the Alto de la Tornería. After having travelled 7km in total, you will be able to see the panorama of the coast; you can make out the stretch of road between Poo and Celorio. At kilometre 8 you can now see el Picu de los Resquilones on the right. This easy to identify, since it has three aerials, which broadcast the television signals for the area. After just one more kilometre, there are even more views of the coast and you can see Llanes, Pancar and Parres. Towards the right you can see the municipal golf course, Cué, Andrín, and San Roque. Going on up again, you can find on the left a memorial stone whose dedication is written in German. It’s almost invisible because of the passage of time but you can see that it commemorates four German pilots from the Condor Legion, whose plane was brought down nearby. A few metres further on, and you can see a stone hut. The footpath begins on the left hand side of the hut. Here we leave the car on a little flat area just in front of the hut.

Here we begin the ascent on foot up to the Picu de los Resquilones. A few metres after having started the route, you can see a great look out point. There are views of Llanes, Pancar, Parres, Cué and, towards the south the Sierra del Cuera. Next to the look out point there is a plaque which commemorates the 60th anniversary of the Battle of El Mazucu, which took place in 1937. The Republican troops resisted the Navarra Brigade very strongly but finally, after a week of heavy losses, they were beaten by the air power of the troops from Navarra. Continue going up towards Los Resquilones and enjoy the beautiful views along the way. Once at the top, the view is spectacular, you can see almost the whole coast from Ovio to Llanes, Celorio, Barro, Niembro etc. and on the right, you can see Cué, Andrín, San Roque and Vidiago, as far as San Vicente de la Barquera.