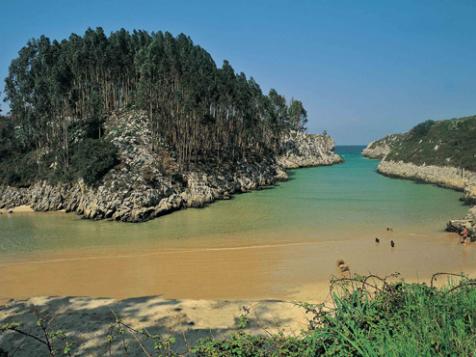 The starting and Finishing point of this route is Llames, it has a low dificulty and a duration of 4.5 hours. In order to get to the village of Llames we have to take the local road AS-379 which we reach by a narrow road starting at Belmonte. The route starts and ends in Llames. Distance: 11,2 Km. Itinerary: Llames- Playa de Cuevas del Mar- Villanueva- La Pesa- Llames. The distance from Llanes to Llames is 22 kms.

The route starts in Llames. Once we have reached this point by car, we can start the walk by taking an asphalt road towards the beach. Llames Beach or the Aguamía Beach, named after the river which springs at this place, is a long stretch of sand perpendicular to the coast. The riverbed is surrounded by sand a few hundred metres inland, thus forming a beach. The sea remains invisible behind the shelvings and during high tide the waves hardly ever reach the place.

Above the beach the route continues to the right on an earthy road reserved to agricultural vehicles which leads to Bramadoriu de Llames, a large “jester” area which, for its geomorphologic value, has recently been classified as a “monument of nature” and included in the network of protected natural sites. If the sea is calm, it is only compressed air which, pushed by the waves beneath, comes out of the numerous subterranean cavities. On days of heavy sea el Bramadoriu turns into a spectacular and frightening sight. The water and the air spring out of the holes reaching dozens of metres of height. The groan of Bramadoriu can be heard kilometres away, sometimes as far as the Peaks of Europe. The local shepherds´ have a saying: “When you hear el Pozu Pría, better collect wood for tomorrow´s fire” (“Cuando sientas sonar el Pozu Pría, coge leña pa’l otru día”.)

From Bramadoriu the route continues on a path winding between the shelvings which will take us to the nearby beach of Villanueva and then to the beach of de Cuevas which is accessible through some stairs running through a small oak forest. The oaks represent one of the most valuable botanical phenomena of Eastern Asturias. From there the route continues on the road leading to Nueva and then takes a turn to the right in order to go back to Llames following the roads which cross Villanueva and la Pesa.