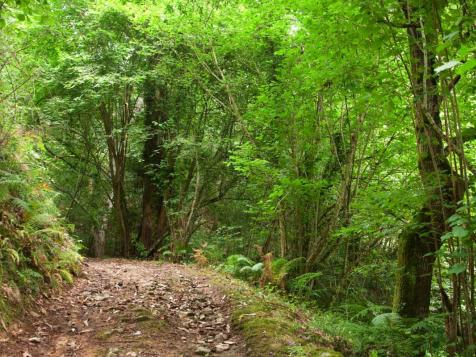 The Many Coloured Route in Valle Oscuru

The “ Many Coloured Route in Valle Oscuru” runs through the valley of the Carranzo or the Valle Oscuru. Its objective is to highlight characteristics and features of this valley which runs along the course of the Río Cabra.

This is circular route, about 13 km in length, which begins and ends in the village of Tresgrandas. (It begins in the village car park at the eastern end of the village.) The route goes through the villages of Santa Eulalia, Pie de la Sierra, el Cereceu, La Borbolla and Boquerizu. The height above sea level varies between 230 metres in La Sierra Plana de la Borbolla and 30 metres at the river Purón.

In addition to the route markers, there are also seven panels which give information about the wildlife, history and ethnography of the valley. For instance; the Indianos, the source of the river Cabra, the watermills on the river, the wildlife, the Sierra Plana, the palaces of Braña Vieya as well as the panorama of the Sierra del Cuera. All of these are illustrated with drawings by Julio Rey.

They say that the name, “Valle Oscuru” comes from a time when the woods in that region were so thick that the sun hardly penetrated to the forest floor; everything was covered with shadows. The old folks say that everything was closed in by the woods.

It is also said that the name comes from the fact that the valley of Carranzo was the last place in the borough to get electric light! There are probably other reasons as well; you only have to look for them along the way.

The river Cabra has been recognised as an area of environmental importance. Along the river banks there are some of the best preserved areas of woodlands to be found in the east of Asturias. These woods are mainly made up of alder, located right next to the river itself.

The wood is closed in and very shady; the tree tops frequently form a tunnel over head, with the river running between them. The wood appears in the European directive, 92/43 CEE, (known as the Habitat directive) and is regarded as a priority habitat).

The river is home for one of the most stable otter colonies in Asturias. The Egyptian vulture also reproduces here every year, beginning its return to its winter home in Africa in the month of September. Both species appear in the list of protected species in the Principality of Asturias and are classified as “vulnerable”.